Loss and Damage! – What about Climate Just Politics?

The party is over … 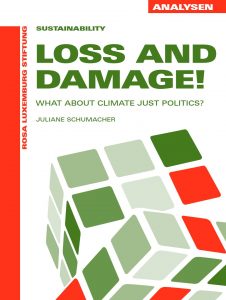 On 12 December 2015, at 7:26 pm, Laurent Fabius banged his gavel – and cheers broke out at the Le Bourget congress centre near Paris. Thousands of people embraced each other, laughed, took photos and applauded for minutes on end. After two weeks of dramatic negotiations, the plenum of the climate conference had adopted a new climate agreement and French foreign minister and President of the conference Laurent Fabius closed the historic event. Political leaders from all corners of the globe hailed the outcome. «It is a victory for all of the planet and for future generations,» said US Secretary of State John Kerry. «This is a moment in history,» UN General Secretary Ban Ki Moon promised. And French President François Hollande passionately exclaimed, «In Paris,
there have been many revolutions over the centuries. Today it is the most beautiful and the most peaceful revolution that has just been accomplished – a revolution for climate change. Thank you. Vive les Nations Unis, vive la planète, et vive la France!»

… but who is going to foot the bill?

Nearly one year on and the next climate conference is now set to take place. In November 2016, representatives from 195 states will again convene, this time in Marrakesh, Morocco. Whilst the joy over the global climate agreement remains palpable, negotiations will be less spectacular this time. In terms of determining the course of climate change, however, and the future of those who are already suffering its effects, they will be more important than last year’s adoption of the Paris Agreement. Following last year’s symbolic decision, and far from the public stage, governments will now have to answer two fundamental questions: who will do what? And who will pay?

Heads of government will have to discuss how industrialised countries can implement the promised reduction of greenhouse gas emissions. How will reductions be calculated? Which loopholes will be accepted and which will need to be closed? Negotiations will
need to determine how we will adapt to climate change and who is going to pay for these measures. Where will the envisaged one hundred billion EUR, which should be made available annually from 2020 onwards, come from? Who gets what and how much? What about the damage caused by manmade climate change? Even the most ambitious climate protection measures will not prevent the irrevocable destruction of the natural, social and cultural fabric of people’s lives. Oceans will swallow large swathes of land or even entire island nations, coral reefs will die and agricultural lands will become salinated or dry up. For years, the question of responsibility has been discussed under the label of loss and damage. The Paris Agreement is the first to contain a specific
article on loss and damage. A victory for those affected most severely by rising sea levels, storms and droughts and a good opportunity to take a closer look at this concept. This is not only because, as has been clear for some time, global warming can no longer be stopped, and humanity will therefore have to find ways of adapting to the challenges and losses, but also because loss and damage touches on one of the central questions for climate policy, namely that those who contributed the least to global warming are the ones who suffer most from its consequences. What implications does this fact have for a just climate policy? In Marrakesh and beyond heads of state will also have to negotiate this question. It will show who is truly willing to go beyond mere words and promises to mitigate the consequences of climate change.

More in the pdf.