Mining and the people’s consciousness

The Movement for Popular Sovereignty in Mining celebrates its sixth birthday and poses itself the challenge to put one of Brazil’s most conflictive production chains on the country’s agenda. Rosa Luxemburg Foundation supports this struggle.

In mid-May this year, about 700 people from 16 Brazilian states met in Parauapebas, in the south east of Pará, to discuss an issue that impacts the lives of hundreds of communities and families, yet is not very present in the minds of the Brazilian people: the extraction, processing, transport and impacts of mining.

The image the general public has of mining in Brazil is probably that of the iron ore mine of Carajás (owned by Vale), the largest of its kind in the world. It was established during the military-civilian dictatorship (1964-85) in the region where today the city of Parauapebas grows disorderly.

More recently, the country’s worst environmental crime in history, caused by Vale and BHP Billiton in Mariana, has caused national commotion. It fatally killed 19 people, it killed the Doce River and it affected hundreds of communities in the states of Minas Gerais and Espírito Santo. The commotion was mainly caused by the impunity granted by the State and the Judiciary to the multinational companies. But few are aware of the broader impacts of Carajás, or of the fact that what happened in Mariana happens across the country. With particular emphasis on the impunity.

Pará, one of the states that is most affected by mining activities in Brazil, has also been one of the main stages of the conflicts related to the sector. This is why a movement called the Movement of the Affected by Mining (MAM) was born here about six years ago, in this region of the Grande Carajás project. Initially promoted by members of the Landless Workers Movement (MST), the purpose of the MAM is to unify the struggles of the victims of the mining industry. Since then, the MAM has grown to become a national movement. Keeping the same acronym, it changed its name to Movement for Popular Sovereignty in Mining.

Through the frame of this 1st National Meeting of the MAM, it is possible to see a complex picture that highlights some of the great challenges that the movement will face in its process of becoming a national social organization.

First, different from the MST (the Landless Workers Movement, from which it originated) or other movements of the Via Campesina, such as the MPA (Movement of Small Farmers) or CIMI (Indigenist Missionary Council), the social basis on which MAM intends to work is varied, diverse and sometimes antagonistic.

How to create an internal culture that makes it possible to deal with indigenous communities, quilombolas, fishermen, farmers and at the same time with urban communities affected by the (ill) (ab)use of water or by the pollution generated in the extraction and processing of iron ore; with communities impacted by railroads or pipelines that drain mining production; with mineworkers and outsourced workers that have precarious labour conditions; with artisanal miners, and others?

Fabiano Bringel, a professor at the Federal University of Pará in Belém, gives an example: after the recent flooding of the tailings basin of the company Hydro, in Barcarena in the state of Pará, the affected communities demanded the closure of the mine. But the workers wanted to keep it operating. How to deal with this paradox? How can we organize groups that are so different in their cultures and in their relations with territories? How to organize in regions where the dependence on mining companies seem insurmountable and its impacts intolerable?

Another challenge of the movement is the regionality and the specificity of the mining activity in national territory. According to Marcio Zonta, coordinator of MAM in São Paulo, about 80 different mining products are extracted and processed in Brazil. How to deal with the specificities of uranium mining in Bahia, granite in Rio Grande do Sul, gold in Goiás or bauxite in Pará? How to deal with emerald mining in the Bahian backlands or diamond and gold mining in the indigenous territories of Alto Tapajós (in Pará)? How to deal with the impacts of smelters, old and new railways to transport the ores, of the ore pipeline between Minas Gerais and Rio de Janeiro?

And, finally, the key issue: what does MAM mean with “popular sovereignty in mining”? What is the “soul” of MAM? What is its flag, its strategy, its tactics? 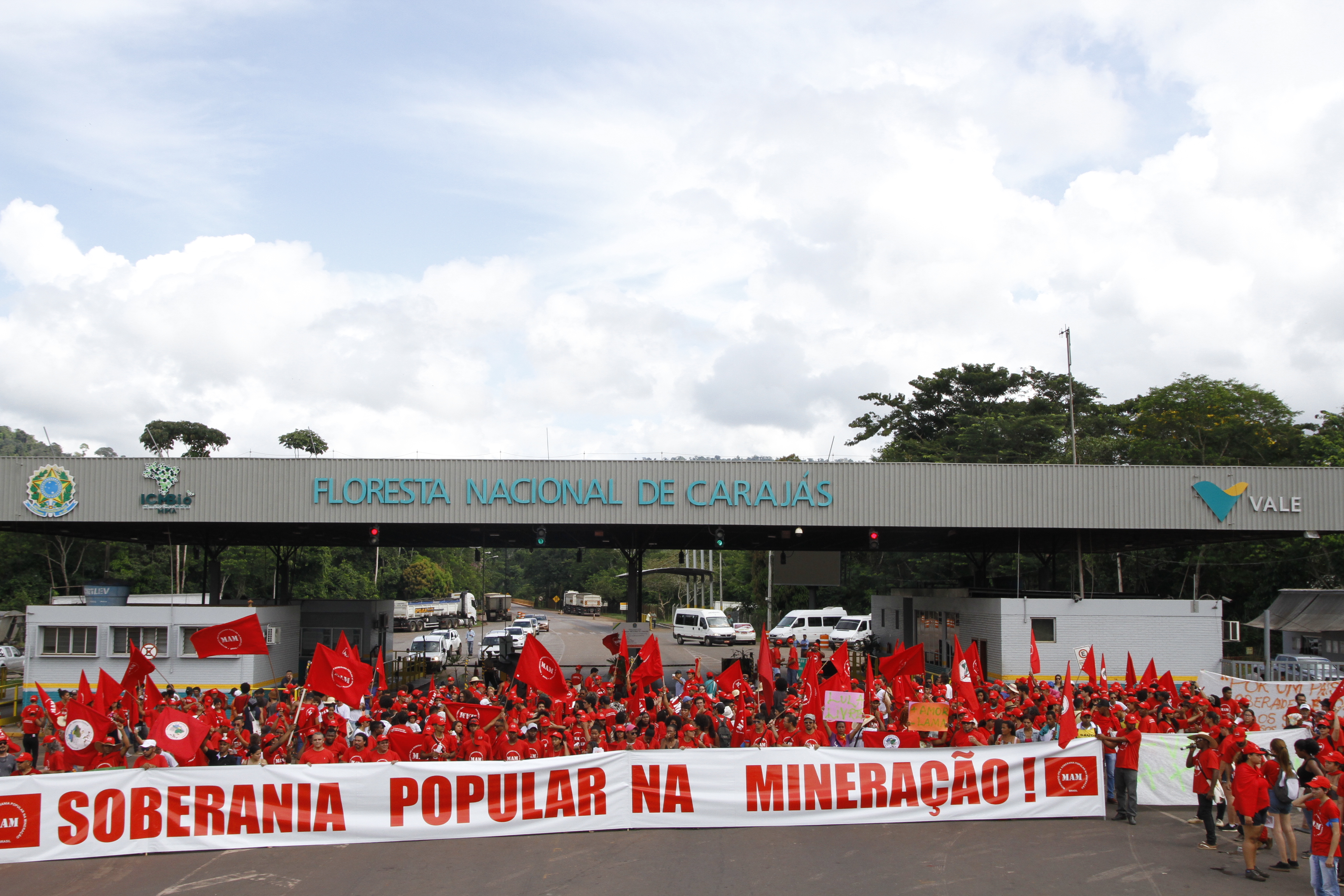 Charles Trocate, national leader and founder of MAM in Parauapebas, explains that during the six years in which the movement sought to gather political strength and to reflect on the mining sector in Brazil, a central element for the MAM matured, which is to not deny mining as a founding principle.

He explains that in this sense, there are three central orientations of the movement: resistance to the implantation of projects in new territories (the right to say no to mining), fight against the expansion of mining and move beyond mining there where the conjuncture allows, and struggle for social control over the country’s natural mineral resources. This includes social participation in the discussion and elaboration of policies for the sector, in the decision on how to use the generated resources, and in the definition of how, where and for who the ore is produced.

What we need is to organize the social forces and give another destination to what Carajás produces”, Trocate explains. “To say that we are against mining makes it difficult for us to dialogue with society. No society lives without mining. But mining cannot just be done anyhow, impacting everything. We have to build a pact with Brazilian society. Our motto is: say no, overcome, and where this is not possible, to have social and popular control over the activity”, he adds.

According to the leader, it is important to stress that this is the birth place of MAM. “I hope it gets radicalized. We have a great need for political awareness, we have to move beyond denunciations, and we have to gather popular wisdom to understand what is ‘popular sovereignty’. The program of the MAM has not yet been finalized. What we have are its nuances.”

However, what is clear, Trocate points out, is that the response to the mineral conflicts and the basis of resistance must be linked to civil disobedience and not to a process of bureaucratization and institutionalization of the movement. “Civil disobedience must be our mark. We have to disobey the laws of capital and the mining code, and we have to dissociate the actions of the communities from the institutionality of the State. ” 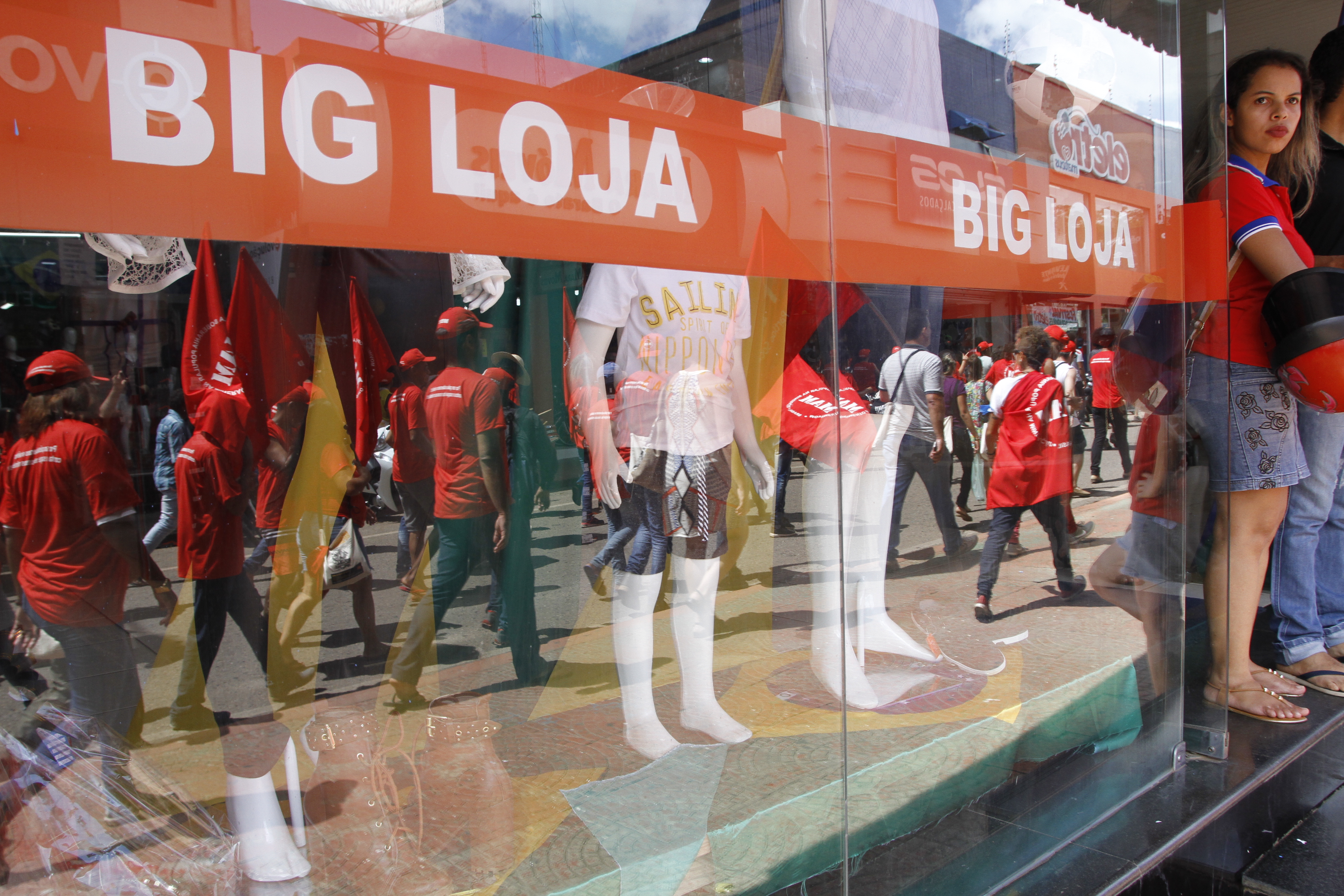 With an eye on taxes

The MAM has adopted a profoundly critical discourse on what it understands as an incestuous relationship between the state and capital. The state acts as an extension of the mining business in the licensing procedures, in the legislative processes and in its leniency with missteps and social and environmental impacts. In this sense, the movement will have to create a rift in this relationship between the state and capital, says Marcio Zonta.

On the other hand, the MAM has chosen two priorities that have a strong link with state institutions: the struggle to increase the value of the CFEM (Financial Compensation for the Exploration of Mineral Resources, or royalties from mining, paid by companies to municipalities (65%); to the states and the Federal District (23%), and to Federal administration organs (12%) and the end of the Kandir Law, which exempts products and services destined for export from ICMS tax (VAT).

Although there is no legal provision for the allocation of royalties collected by states and municipalities to environmental or social compensation, health, education or other benefits for the population affected by mining, according to the coordination of the MAM “striving to increase CFEM should not be a problem for us; because the higher the fee a company will have to pay to the government, the less it will want to settle here. Companies are settling anywhere because they do not pay much tax,” argues the direction of the movement.

“We are trying to build critical thinking in society about mining,” Charles Trocate concludes. “In many places we will build the MAM, but in others, if we help make society understand that there is an ongoing mineral problem, we have already played an important role. During the next period, between 2018 to 2021, we have to think of agroecology as a way to move beyond mining; spreading political awareness about how to overcome mining, and communication and massification of knowledge about the mineral conflict.”

And, of course, the strengthening of the efforts to make the MAM a national movement. “Defeating the resistance is easier if we are not organized,” adds Marcio Zonta.” There are many territories across the country where mining companies want to enter. This represents a huge looting that is yet to come. Therefore, where there are conflicts with mining companies, we will act on a national level.

Read below the resolutions contained in the final document of the national MAM meeting:

1- Wherever there is mining, fight to stop any expansion of mining projects; fight for the due payment of royalties (CFEM) and for the increase and democratization of the CFEM so that it will attend popular needs, and to end the Kandir Law.

2 – Where there are attempts by the mining companies to grab the territories of indigenous, quilombolas, traditional communities, peasants and river dwelling people, we will do whatever is necessary to fight the mineral project in all its forms – be it at the mine pit, the railroad, tailings dam, ore pipeline or port.

3- Report and fight the practice of tax evasion used by miners in tax havens.

4 – Report and fight the contamination of water, soil and of the people living in the surroundings of projects, caused by mineral exploration.

5 – Support the struggle of mineworkers in issues related to the right to health and occupational safety.

6 – Contribute to the construction of the Popular Front and the People’s Congress in the municipalities in which the MAM is present.

7- Continue the construction of feminism as a principle of a new society that fights for the liberation of men and women, in the fight against machismo and violence against women, as was deliberated in the Assemblies of Men and Women held at the First National Meeting.

We realise that these commitments require a lot of effort and unity with various progressive sectors of society, in order for them to be fulfilled and to move towards a program of popular sovereignty in mining. Only this way can we make the Brazilian people question the present predatory model of society and move towards the construction of the Popular Project for Brazil.

For a sovereign and serious country, against the plundering of our ores!

Movement for Popular Sovereignty in Mining