... but there are alternatives to capitalism - Rosa Luxemburg Foundation
Sustainable development is failing...

… but there are alternatives to capitalism

All over the world, environmental justice movements are challenging growth-oriented development and neoliberal capitalism

In the face of worsening ecological and economic crises and continuing social deprivation, the last two decades have seen two broad trends emerge among those seeking sustainability, equality and justice.

Political ecology paradigms, on the other hand, call for more fundamental changes, challenging the predominance of growth-oriented development based on fossil fuels, neoliberal capitalism and related forms of so-called representative democracy. 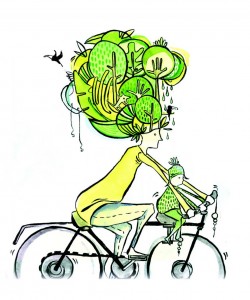 The false answers of the green economy

If we look at international environmental policy of the last four decades, the initial radicalism of the 1970s has vanished.

The outcome document of the 2012 Rio+20 Summit, The Future We Want, failed to identify the historical and structural roots of poverty, hunger, unsustainability and inequity. These include: centralisation of state power, capitalist monopolies, colonialism, racism and patriarchy. Without diagnosing who or what is responsible, it is inevitable that any proposed solutions will not be transformative enough.

Furthermore, the report did not acknowledge that infinite growth is impossible in a finite world. It conceptualised natural capital as a “critical economic asset”, opening the doors for commodification (so-called green capitalism), and did not challenge unbridled consumerism. A lot of emphasis was placed on market mechanisms, technology and better management, undermining the fundamental political, economic and social changes the world needs.

In contrast, a diversity of movements for environmental justice and new worldviews that seek to achieve more fundamental transformations have emerged in various regions of the world. Unlike sustainable development, which is falsely believed to be universally applicable, these alternative approaches cannot be reduced to a single model.

Even Pope Francis in the encyclical Laudato Si’, together with other religious leaders like the Dalai Lama, has been explicit on the need to redefine progress: “There is a need to change ‘models of global development’; […] Frequently, in fact, people’s quality of life actually diminishes […] in the midst of economic growth. In this context, talk of sustainable growth usually becomes a way of distracting attention and offering excuses. It absorbs the language and values of ecology into the categories of finance and technocracy, and the social and environmental responsibility of businesses often gets reduced to a series of marketing and image-enhancing measures.”

But critique is not enough: we need our own narratives. Deconstructing development opens up the door for a multiplicity of new and old notions and world views. This includes buen vivir (or sumak kawsay or suma qamaña), a culture of life with different names and varieties emerging from indigenous peoples in various regions of South America; ubuntu, with its emphasis on human mutuality (“I am because we are”) in South Africa; radical ecological democracy or ecological swaraj, with a focus on self-reliance and self-governance, in India; and degrowth, the hypothesis that we can live better with less and in common, in western countries.

These worldviews differ sharply from today’s notion of development, challenging the dogmatic belief in economic growth and proposing in its place notions of wellbeing. They are internally diverse, but they express common fundamental values, including solidarity, harmony, diversity and oneness within nature.

There are already thousands of initiatives practicing elements of such socio-ecological transformation: the reclamation of indigenous territories and ways of life in the Americas, the Zapatista and Kurdish movements for self-governance, solidarity economies, producer cooperatives, transition towns and community currencies in Europe, land, forest, and direct-democracy movements in Latin America and South Asia, the rapid spread of organic farming and decentralised renewable energy across the world, and others.

Many of these form a basis for transformational politics, potentially supported by the case with Syriza in Greece and Podemos in Spain. This is what has been called plan C, a reinvigorated bottom-up project of the commons and communal solidarity. This would be an alternative to the failed plan A (austerity) and untested, but flawed, plan B (Keynesian growth based on further indebtedness).

The inability or unwillingness of UN processes to acknowledge the fundamental flaws of the currently dominant economic and political system, and to envision a truly transformative agenda for a sustainable and equitable future, is disappointing. Even as civil society pushes for the greatest possible space within the post-2015 SDGs agenda, it must also continue envisioning and promoting fundamentally alternative visions and pathways.

Radical wellbeing notions are unlikely to becoming prevalent in the current scenario. But it is not an impossible dream. As intertwined crises increase when even the green economy fails to deliver – as it inevitably must – people everywhere will be resisting and looking for meaningful alternatives.

*Ashish Kothari is a member of Kalpavriksh (Pune, India) and co-author of Churning the Earth (Penguin, 2012). Alberto Acosta is professor at Flacso (Quito, Ecuador) and author of El Buen Vivir (Icaria, 2013). Federico Demaria is a member of Research & Degrowth, a researcher at ICTA UAB (Barcelona, Spain) and co-editor of Degrowth: A Vocabulary for a New Era (Routledge, 2014).