The Public Audience against Free Trade Agreements (FTA) took place this July 11th in the National Congress of Argentina. This activity was organized by the Assembly “Argentina better off without FTAs” and was summoned by MP Alcira Argumedo.

The audience was coordinated by Luciana Ghiotto (ATTAC Argentina/TNI), who announced that the objective of the meeting was to make FTAs well known by the general public and also to build consensus between all the participant organizations and representatives, among which were unions, small businesses groups, environmental groups, political parties and social movements. The overall objective is to build a national campaign against the agenda of liberalization. Also, Alcira Argumedo denounced these treaties because they are negotiated in absolute secrecy and reminded the audience that the FTA agenda implies the rupture of the regional integration processes achieved so far, and particularly puts Mercosur in danger.

Afterwards, these interventions were followed up by 18 leaders from different organizations that referred to the topic of the audience. They explained that there is a need to articulate in order to allow the action unity of all the social and political organizations against the FTA agenda. In order to achieve this, they remembered the experience of the struggle against the Free Trade Area of the Americas (FTAA), when the articulation of all the movements helped in the defeat of that FTA in 2005. 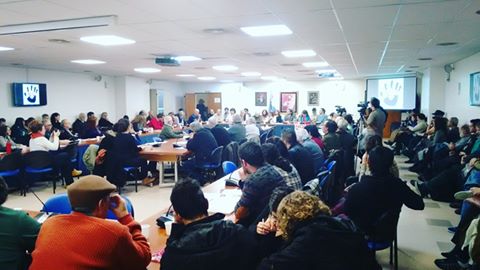 Also, some of the interventions referred to the need of analyzing in depth the new situation of capitalist liberalization, in comparison to what happened in the nineties and in the last decade, changes that are reflected in the new type of FTAs. This implies a new wave of rights for corporations, diminishing the rights of citizens. In the Audience, it was agreed that our focus should be set not only on the Trans-Pacific Partnership (TPP), but also on all the treaties that are being negotiated by the new Argentinian government, such as the ones being dealt with the European Union and the USA, and also the ones announced with Japan and China. Likewise, it was argued that there is a danger that Argentina might want to become part of the Trade In Services Agreement (TISA), which is a secret agreement to further liberalize the services sector.

It was agreed that the next important date for mobilization is the Continental Action Day of November 4th, which has been called as an action day against free trade and corporate power.